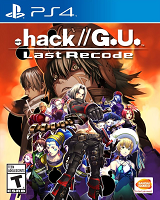 From 2002 to 2004 in North America and Japan, Bandai released the CyberConnect2-developed .hack tetralogy on the PlayStation 2, with the serialized games having essentially the same gameplay and a continuous storyline, following the .hack//Sign anime chronologically. From 2006 to 2007, they released a sequel trilogy, the .hack//G.U. games, during the final days of the PS2. A decade after the final game in the G.U. trilogy released, Bandai Namco released within a few days in Japan and North America a collection of th G.U. games with extra content for the PlayStation 4 and PC, .hack//G.U. Last Recode, which is the ideal way to experience the games, but are they any good?

The G.U. games occur in an alternate Earth 2017, with an updated version of The World massively-multiplayer online roleplaying game, like its predecessor, causing players to go into comas. Cue anyone who has played the original tetralogy and didn’t are much for their narrative to roll their eyes and lose interest in the storyline, and this reviewer definitely doesn’t blame them, with the G.U. games focusing on a player character, Haseo, nicknamed the Terror of Death, who loses all his levels and has to start grinding from scratch whilst unveiling the continued mysteries of the MMORPG.

The main problem with the storyline is that it remains virtually confined to Haseo’s computer and The World, and while faux real-world news stories give some clue as to what’s happening in the real world, although much of it is irrelevant to the game’s storyline, such as the naming of a space station. Most of the player characters with whom Haseo comes into contact, and the protagonist himself, furthermore, are about as complex as Dudley Do-Right, with only vague clues as to their real-life owners and mostly irrelevant characteristics. There is some decent background to The World itself and maybe some actual meaningful development, but the plot overall is a definitely turnoff.

For the plot to actually make some sense to the Anglosphere was actually surprising, considering how dismal the translation is. While the translators for the most part avoid spelling and grammatical errors, the dialogue itself hardly sounds natural, with lines such as Haseo, whenever he summons his plot-centric Avatar (whose name he shouts afterward is a spoiler), saying, “Come on! Come on! I’m right here!” Battles also naturally have terrible writing, with characters for the most part shouting the names of their skills, and in some cases random things that no Anglophone would ever say unless on drugs. In the end, the localization would have definitely benefitted from the touch of actual English majors.

Narrative foibles aside, the gameplay actually isn’t half-bad, being action-based like most MMORPGs The World attempts to simulate. In the hub towns, the player forms a party consisting of Haseo and two internet friends, before they explore dungeons indicated by three keyworks following a Greek letter indicating the current server. Unlike the swirling yellow portals of the original .hack tetralogy, all enemies indicating fights are visible, with encounters occurring when the player’s party draws near them, and a cylindrical barrier rising to limit the battlefield, largely reducing problems present in many three-dimensional action RPGs such as a bothersome camera.

The G.U. games’ targeting system is automatic when drawing near encountered foes unlike other ARPGs such as the Kingdom Hearts series, Haseo able to hack away at foes with ultimately-interchangeable weapons and use skills assigned to accessible shortcuts, a definite step up from the prequel tetralogy. Standard battles typically end within a minute, victory rewarding players with experience proportional to their characters’ current levels (with a maximum of 150 in the third game and its epilogue), money, and maybe items. New to the three main games and their epilogue is a Cheat Mode for each where players begin with maxed levels and equipment, ideal for those who wish to breeze through the games and experience their storyline (if one can call it an experience).

Avatar battles, however, require more skill that leveling doesn’t rectify, with Haseo’s god incarnation able to fire bullets at the enemy to deplete a gauge which, when empty, stuns the foe, quickly dodge antagonistic attacks, or slash the adversary to actually damage it. Terminating the foe’s HP gives Haseo the chance to Data Drain them, which too requires some skill and even has a time limit, although it mercifully isn’t a terribly taxing process. Overall, the gameplay is a definite step above the original .hack tetralogy’s, although it falls prey to common RPG tropes such as bosses with dozens of phases.

The G.U. games are largely linear, so it’s fairly difficult to get lost, the player able to access a memo clueing them in as to how to advance the primary plotline, although the operating system interface where players access simulated emails and whatnot is a bit needlessly flashy. Perhaps the biggest strike against control is that most voiced cutscene dialogue is unskippable, even during scenes that utilize the standard graphical style, with hearing-impaired gamers unable to appreciate (or not) the voicework. Save opportunities, moreover, don’t always come before tough battles, but interaction somewhat helps the games more than hurts.

A far bigger issue, however, is the voice acting, which ranges from acceptable to downright awful, with many female characters having voices that could shatter glass, made worse by the terrible writing. The translation team also didn’t bother with matching the voices with mouth movement during the rare scenes in which lips do indeed move, resulting in kaiju film-esque lip flapping during many story cinematics. The music is actually fairly enjoyable at times, if rather unmemorable, and ultimately, while the acting is of low quality, the aural themes certainly aren’t a total writeoff.

Despite allegedly being a “remaster,” the visuals contain a surprisingly-large amount of imperfections, one of the biggest being that during most voiced cutscenes, the characters’ lips don’t move at all, inexcusable since many other RPGs during the original games’ time, 2-D and 3-D alike, often didn’t suffer from this issue. Pop-up of distant objects is frequent when navigating fields and dungeons, furthermore, the environmental texturing frequently appears blurry and pixilated, and character model features such as clothes and skin often pass through one another. The CG cutscenes, particularly the cel-shaded anime movies in the epilogue, though, actually look good, but there’s no excuse for the other subpar graphics.

In conclusion, Last Recode, for the most part, is what a videogame remaster shouldn’t be, given many strikes against it such as common gameplay clichés such as many fetch quests and multi-phased boss fights, abundance of unskippable voiced dialogue, the abysmal narrative and writing, the horrible voice acting, and the lazy “remastered” graphics. The collection, however, certainly isn’t a total writeoff, given some positive aspects such as the general nature of the gameplay, the straightforward structure of the games themselves, some enjoyable musical tracks, some pretty CG cutscenes, and loads of side content. Even so, back in the collection’s “one game for the price of three” days on the PS2, it would have been a flat-out rip-off, but at its current discount price on the PlayStation 4, it isn’t a bad bargain; just don’t expect masterpieces.

The Good:
+One of the better anime-based games.
+Hard to get lost.
+Some decent music.
+A few pretty CG scenes.
+Tons of side content.

The Bottom Line:
Not bad at its discount price, but most aren’t missing much.