Author Jeff J. Peters dedicates this debut fantasy novel to his sons, for their pure enjoyment; his wife for her endless love, patience, and comradery; and to his master teacher, who helped him find his voice. The prologue features a one-chapter-wonder character, the dwarf Thrag, who completes his patrol, finding a totem and fighting Minotaurs, Mins for short as they’re more commonly called, in the mountains. The main chapters begin with protagonist Braxton Prinn, Brax for short, breakfasting, going to the Walking Gate with his mother Jen, and separating to meet his Captain, Terran. The Merchant Tide festival occurs, although giants attack from the Gate.

Afterward, Brax receives a pendant from his mother he’s instructed to transport to a tree in Arbor Glen, and discloses a secret about her lineage to her son. His father gives him an ancient weapon termed the Unicorn Blade, and he sets off on his quest with the dwarf Ruskin. Brax has a vision of his deceased grandfather, Tyrrideon, Ty for short, whose unicorn Serene promises to teach him how to use the fabled weapon. Brax’s abilities with the armament are first put to the test when a gang of rogues attacks. Brax travels to an inn owned by Zambini, who gives his backstory as a ship’s slave from which he fled.

Brax fights many enemies in his journey, such as a hunter named Zacharias and the Dark Child, with the novel at the end indicating the meaning of its title. Overall, this is definitely enjoyable for an author’s first fantasy novel, given its relative linearity and absence of complex subplots, although there are nods to other franchises such as Star Wars, with Brax, for instance, receiving a special power akin to the Force, and some twists that occur throughout the story seem derived of other fantasy and science-fiction stories. Even so, those who enjoy traditional fantasy books will likely enjoy this engaging yarn.

It has been six hundred years since the Alchemists fused together men and beasts to form strong, mindless slaves. Now, their most vicious creations have attacked the mystical Walking Gates, slaughtering their Keepers and isolating their cities. Wounded in the brutal attack, Braxton Prinn’s mother is on the verge of death and he makes a desperate journey to find the reclusive elven master who can save her. But when he discovers an ancient magic, Brax is caught up in an even greater struggle and soon finds himself hunted for his power. Drawn into the chaos of an impending war and pursued by enemies on all sides, Brax must fight to save his mother and her race from slipping into darkness. Though his untamed magic may be the greatest threat of all . . .

What Readers are Saying about Cathadeus:

“Jeff J. Peters’ strong cinematic writing style allowed me to easily visualize the story and feel that I was right there alongside the characters.”
- Alison W.

“Jeff J. Peters’ writing is so smooth and easy to read – I can’t tell you how much of a pleasure it was…and how quickly you end up being drawn into the story because of it.”
- Amanda R.

“Cathadeus is the best kind of fantasy story - you get to learn along with a flawed main character while you get lost in a richly designed world. You can’t help but keep reading. A cleanly written pairing of characters you wish you could spend more time with and an enthralling world built around them. Cathadeus is the kind of story that plays perfectly off of your imagination, with characters grounded in reality to make it feel like you could really be there.”
- Ryan N.

“Jeff J. Peters definitely has storytelling skills...The story stayed on my mind when I wasn’t reading it. Young readers will be drawn in this imaginative story, while they relate to Braxton’s struggles with temper, insecurity, and young love. Cathadeus is dramatic, with an anxious tone—at times bleak, as the story keeps you wondering until the final battle if good will prevail.”
- Elizabeth C.

JEFF J. PETERS was born in South Africa and immigrated to the United States as a teenager, where he fell in love with all things fantasy. He obtained degrees in digital electronics and computer science and worked as an IT professional for more than twenty years. In 2014, he left his corporate position to focus full-time on writing. Cathadeus is his debut novel. He is currently working on the sequel. 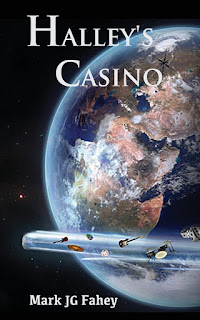 Author Mark JG Fahey dedicates this lighthearted science-fiction novel to Rosemary, and opens with a verse from protagonist Nebula Yorker, Neb for short, about no one knowing the future, living in the present being enough, and that the past is the future. The main action of the novel begins on February 26, 1986 at 1:16 AM in Woodside Hills, California, where Neb looks at the skies with his telescope in anticipation of Halley’s Comet, which for some reason begins to move towards him, and materializes into a British-accented man named Archibald Tict.

Tict gives his backstory, noting that his mother, a servant of Queen Anne in the eighteenth century, died in childbirth, and is a time traveler, taking Neb to Halley’s Casino, which disguises itself as its namesake Comet. Neb meets a few alien characters, such as TeeceeFore, who is the Prime Minister of Telvon Three, and is introduced to unique casino games such as Crib Poker, not to mention a council of the known universe, Council of U for short. Time travel plays a role in the book’s latter events, with a trip back to Rome in 12 BCE where critical events unfold.

Star Trek, and occasionally Star Wars, references abound throughout the novel, which is for the most part an enjoyable humorous sci-fi novel, with a twist towards the end concerning Neb’s heritage, although as with most stories dealing with the subject, time travel is plot hole fodder, although the connection of the element to the appearances of Halley’s Comet is definitely unique. This reviewer most certainly enjoyed the story, would be more than willing to read its sequel Marine in the near future, and would recommend the book to fans of lighthearted sci-fi like the Hitchhiker’s Guide to the Galaxy series. 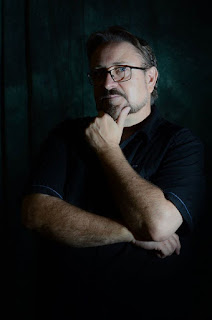 Mark JG Fahey is not an alien, contrary to what you may have heard, though he swears he has been to space. Mark has dabbled in various undertakings throughout his illustrious career, from on-air hosting/reporter/stand-up comic to messenger for the Prime Minister of Canada. Mark also holds a degree in Restaurant Services. His family and friends can attest to his excellent cooking skills. Born in Ottawa, Ontario, Canada, Mark was raised and still resides in Aylmer, Quebec, Canada. Halley's Casino is the first book in the Halley's Casino trilogy.