The first entry of author Alan Dean Foster’s Spellsinger series opens with an enemy wizard, on the fourth day of Eluria, following the Feast of Consanguinity, vowing to take over the Warmlands. Following this, human protagonist Jonathon Thomas Meriweather encounters the otter Mudge, scarcely a foot shorter than he is. The lutrine takes Jon-Tom to the abode of the turtle wizard Clothahump, who informs the human that he deliberately summoned him to his world, given the looming threat of the insectoid Plated Folk. In this otherworld, all warmbloods except four-legged herbivores such as horses and bovines are intelligent beings.

Clothahump appoints Mudge to be Jon-Tom’s guide in the nearby Lynchbany Towne, which has a disposition similar to the feudal era of Earth’s Europe, where the prelaw college student acquires new clothes to blend in, and where the two dine at the Pearl Possum. However, a brawl breaks out there, with the human woman Talea rescuing them and leading them to the Thieves’ Hall outside town. Jon-Tom, Mudge, and Talea agree to stay clear of Lynchbany for a while, and ultimately come across abandoned items, among them being a string instrument known as a duar, with which the prelaw college student demonstrates talent as an eponymous spellsinger.

After an encounter with miniature beings known as gneechees, the group returns to Clothahump’s home, with the turtle wizard noting Jon-Tom’s talent with the duar. During an attempt to return the student to his world, the human woman Flores Quintera materializes in the otherworld, with a discussion following on the danger that the Plated Folk pose. Their Empress, Skrritch the Eighteenth, is amassing forces in the Greendowns, with Clothahump making it a goal to follow the River Tailaroam upstream. In the glade of Triane, the turtle and his servant, the bat Pog, summon the equine spirit M’nemaxa, who doesn’t seem to have much bearing on the story.

A ship of unsavory passengers adds the aristocratic rabbit Caz to the party, and whilst Jon-Tom attempts to summon river salamanders as transportation up the river, he inadvertently summons the dragon Falameezar-aziz-Sulmonmee, who has socialist leanings. The first entry concludes in the city of Polastrindu, where Jon-Tom briefly finds himself captive of insurgent humans that wish to start a race war, and Falmeezar considers incinerating the city after an argument with capitalists. Overall, this is a good introduction to the Spellsinger series, given its intelligent animal characters and predating Redwall by a few years, with only minor narrative issues such as an anachronistic reference to Armageddon.

Posted by Gallen Remy at 8:29 PM No comments: 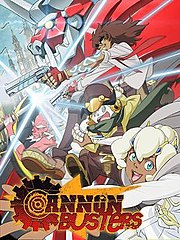 An anime adaptation of an American comic series focused on immortal outlaw Philly the Kid, who teams with the android Sam and diminutive robot Casey, with a giant coin-operated car called Bessie, which can transform into a bovine robot, thrown into the mix. The futuristic/western setting sort of reminded me of the show Firefly, and it was generally a good watch.
Posted by Gallen Remy at 11:14 AM No comments:

The Colour of Magic 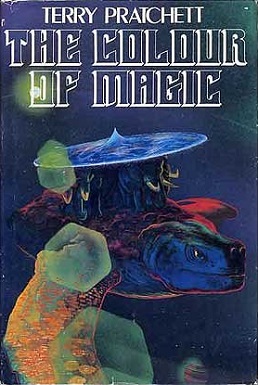 In the debut entry of the late Terry Pratchett’s Discworld series, he gives some background on the world in which his stories occur, with the franchise’s eponymous world sitting atop a giant turtle named Great A’Tuin, atop which four sizeable elephants named Berilia, Tubul, Great T'Phon, and Jerakeen sit as well. This was a hypothesis until emissaries from the secretive nation of Krull were lowered beyond the edge of Discworld, with the gender of the voluminous tortoise being indeterminate. The turtle itself is supposedly crawling from its Birthplace to the Time of Mating, from which shall come a Big Bang.

The story proper commences with colorful fire raging through the twin city of Ankh-Morpork, with some characters observing from a distance. One of the more confusing aspects of the story is that it’s a tad unclear as to whether Bravd and/or the Weasel are one in the same character or separate entities. The chief protagonist is an amateur wizard named Rincewind, with a citizen of Bes Palargic, the major seaport of the Agatean Empire, named Twoflower, coming with supposed treasure. The wizard and this rich fellow embark upon a series of misadventures, along with animate Luggage, that will take them to the edge of Discworld, maybe beyond.

This is a good start to the vast literary pantheon for the most part, although there are peculiarities such as the story’s main sections not divided by any chapters, which can occasionally lead to confusion regarding things such as a change of scenery or viewpoint. The franchise is further billed as a comical fantasy series, although this reviewer didn’t laugh much at the humor, despite the abundance of many humorous situations. Furthermore, the author is kind enough to introduce the setting of his series’ many novels, with the uniqueness of its suspension, and this critic would definitely recommend this read, which is undoubtedly unorthodox.

Posted by Gallen Remy at 8:33 PM No comments:

The inspiration for the monochrome movie The Last Man on Earth, the Charlton Heston vehicle The Omega Man, and the film of the same name starring Will Smith, I Am Legend, despite its meager length, is inarguably author Richard Matheson’s magnum opus, opening with protagonist Robert Neville preparing a meal for himself, not to mention garlic and stakes to repel the vampiric beings that populate the planet due to a widespread plague. Neville is regularly taunted by one of the vampires, Ben Cortman, originally an old friend, and drives through post-doomsday California, mourning his daughter Kathy.Neville visits the tomb of his wife Virginia, having an encounter with vampires there, and returns to his home in Gardena where, due to his leaving his home’s garage unsecured, he has to deter more of the creatures and remake his abode. The alleged last man on Earth regularly has flashbacks of his wife and daughter, with talk of mutating bugs and the spread of disease that ultimately incite the vampiric pandemic. Neville believes that blood holds the key to stopping the plague, discovering the vampirism to be bacterial, and performing experiments involving things such as exposing vampiric blood to garlic.The scientist in one instance bonds with a dog that survived the worldwide epidemic, and discovers the possibility that there might be other humans left in the world. The final chapters provide twists with hints of social commentary, including the revelation of the meaning of the novella’s title. Overall, I found it a good short novel, although it’s somewhat anachronistic given its setting in the 1970s, and one might find difficult discerning flashbacks from “present” passages. Being autistic, as well, I also somewhat sympathize with the themes of the story presented in the latter sections, and would recommend the story to those who can look past the anachronisms.
Posted by Gallen Remy at 9:42 PM No comments:

A fantasy anime that seems to borrow elements from the Wheel of Time book series with the warrior / magician bonding seeming similar to that of Aes Sedai and Warders within the books, although there are other elements such as werewolves and vampires, the action is generally good, and I definitely don't regret watching this.
Posted by Gallen Remy at 11:19 AM No comments:

A Bolt from the Blue / Fire and Rain 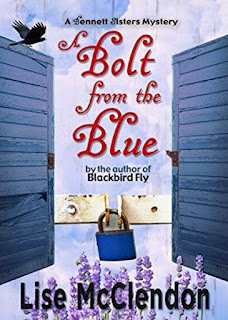 Book Description:
More international intrigue, murder, and romance for the Bennett Sisters overseas in the newest entry to the bestselling women's fiction and suspense series. The next to youngest Bennett Sister, Francie Bennett (Blame it on Paris) is a hard-charging attorney whose boyfriend Dylan Hardy invites her to join him in Paris to help with a client. When Axelle Fourcier left Paris behind after the student riots of 1968, she vowed never to go back. She made a life for herself in America as a professor.

But now a beloved aunt, age 104, has died and left her an inheritance to be shared with a cousin she never met. A fabulous Belle Epoque apartment in Paris filled with pop art from the '50s and '60s is just the start of Axelle's discoveries in Paris. Wrangling with her slick cousin for the proceeds is distasteful but oh so French. Then the apartment is broken into, a friend is murdered, and Axelle's fears that the French state is once again conspiring against her seem very plausible.

Francie tries to deal with her cranky client, her own new relationship, and her boyfriend's nine-year-old daughter, as the estate problems spin out of control. Intrigue, romance, Paris and the Dordogne, and a soupçon of murder, wrapped in the legal and art world of France bring more than a few 'Bolts from the Blue' to the Bennett Sisters.
Buy the Book:
Amazon.com
Amazon.ca ~ Apple books
Kobo ebooks ~ Barnes & Noble
Add to Goodreads 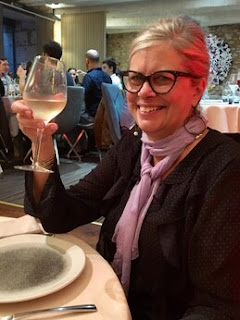 Meet the Author:
Lise McClendon writes fiction from her home in Montana. She is the author of numerous novels, short stories, and articles. In 1997 she wrote and directed the short film, The Hoodoo Artist, featured at the Telluride Indiefest. She has served on the national boards of directors for Mystery Writers of America and International Association of Crime Writers/North America. She is on the faculty of the Jackson Hole Writers Conference.
Her books, written under her own name and as Rory Tate and Grier Lake, are full of the fascinating lives of women. The choices that women sometimes make are a quagmire of directions and misdirections, sending women into careers, love affairs, children (or no children), travels, and hobbies. And, in the case of her novels, into suspense, crime, secrets, and love.
Connect with the author:    Website  ~  Twitter  ~  Facebook  ~  Pinterest  ~  Instagram 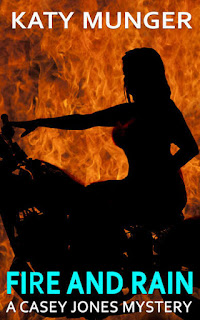 Book Description:
Casey Jones is back with a new adventure that takes her from four-foot strippers to forty-something bikers—and a head-on collision with too many ex-boyfriends to count. When a routine bodyguarding case turns deadly and Casey loses one of her oldest friends, tracking the killers and a missing stripper — who may or may not be in on the murder — turns out to be a wild ride that takes her from the flatlands of eastern North Carolina to its most exclusive mountain enclaves.

Fans of Casey Jones will recognize their favorites in the cast of colorful supporting characters who answer Casey’s “all hands on deck!” call. If you’ve been missing your kick-ass Casey and craving Krispy Kremes, you’ll find all that you have missed in this seventh installment of a long and beloved female P.I. series.
Buy the Book:
Amazon.com
Add to Goodreads 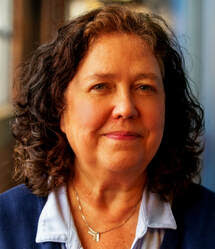 Katy Munger is a North Carolina-based mystery author who has written under several different pseudonyms. She is the author of the Dead Detective series, writing as Katy Munger (Angel Among Us and Angel of Darkness) and as Chaz McGee (Desolate Angel and Angel Interrupted); the Casey Jones crime fiction series writing as Katy Munger; and the Hubbert & Lil mystery series, writing as Gallagher Gray. She has also been a book reviewer for the Washington Post and served as North Carolina’s 2016 Piedmont Laureate.
Connect with the author:    Website 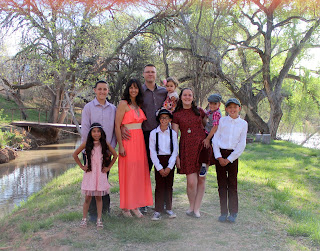