The Murders at Astaire Castle 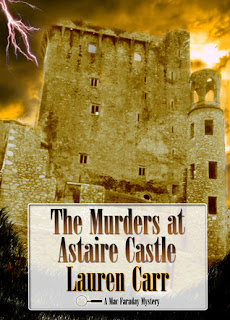 In the fifth installment of author Lauren Carr’s Mac Faraday mystery series, Spencer police chief David O’Callaghan, son of a former police chief and both Mac Faraday’s friend and half-brother, orders the retired and divorced homicide detective to avoid the southern side of the town’s mountaintop, for therein lies the enigmatic Astaire Castle, ranked as one of the most possessed locations in the United States, what with a number of suicides and murders there. Despite his half-sibling’s admonishment, Mac is lured into the castle, with more murders occurring, and Mac running into many peculiar characters. As with other books in the series, a list of dramatis personae precedes the main text, and those that haven’t read prior books in the series will be happy to know that they need not have read them to enjoy this one, which is as with other entries in its pantheon, is a suspenseful and entertaining read.