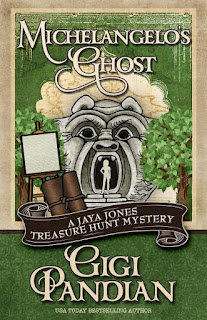 In the fourth installment of the Jaya Jones Treasure Hunt Mystery series, author Gigi Pandian acknowledges her editorial team, beta readers, parents, and significant other James. Though not the initial installment of its franchise, readers will be happy to know that they need not read its predecessors to enjoy the story, which focuses on sundry things such as art from India connecting to the Italian Renaissance, a murderer connected to a ghost story, and a secret in Italy’s sculptural Park of Monsters. Protagonist Jaya’s former teacher dies in strange circumstances, and she and her brother are on the hunt, venturing from San Francisco to Italy, with plenty twists, great historical detail, and so forth. The result is an engaging mystery that fans of prior books and even newcomers to the series will likely digest. USA Today bestselling author Gigi Pandian is the child of cultural anthropologists from New Mexico and the southern tip of India. She spent her childhood being dragged around the world, and now lives in the San Francisco Bay Area. Gigi writes the Jaya Jones Treasure Hunt mysteries, the Accidental Alchemist mysteries, and locked-room mystery short stories. Gigi’s debut novel, Artifact, was awarded a Malice Domestic Grant and named a “Best of 2012” debut by Suspense Magazine. Her fiction has been awarded the Lefty Award and short-listed for Macavity and Agatha Awards. Sign up for her email newsletter at www.gigipandian.com/newsletter.