The Travel Adventures of PJ Mouse 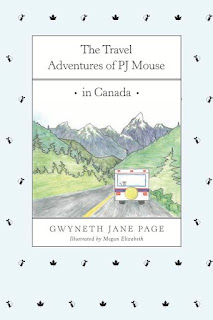 Author Gwyneth Jane Page dedicates this children’s tale to her children, and acknowledges individuals such as Robert Wiersema for getting her started, Ashley Patton for computer assistance, and others for self-publishing aid. Preceding the main text is an illustration of a globe with a distorted view of North America, which is the setting of the story from rodent protagonist PJ’s perspective. The narrative itself opens with the titular mouse falling into a puddle, the initial illustration depicting him under a bench while drenched, having plummeted from a girl’s bag. Fortunately, PJ is discovered by a girl named Emily and her mother and taken home to get cleaned up.

After PJ becomes tidy, he learns of his savior family’s trip across Canada, with illustrations depicting a truck with a trailer. Occasionally peppered in the text are tidbits about the various locales the family and their mouse companion visit, including the Rocky Mountains, the family visiting a glacier in the mountain range as well, several images depicting PJ plummeting into a chasm and supposedly rescued by tape, though in the accompanying picture it looks more like a belt. They visit the Canadian prairies, go swimming in a lake, and proceed to Niagara Falls, with pictures denoting PJ floating up with manmade bubbles before plummeting.

The clan’s next destination is Quebec, visiting an old quarter of Quebec City, with occasional French phrases thrown in, the trip to Canada’s opposite coast ended in Nova Scotia. When they return home to Victoria, British Columbia, several images of flowers and one of fireworks end their trip, with a concluding encounter by PJ with the family cat. Despite the occasional visual incongruities, this is an enjoyable children’s book that younger audiences will likely eat up, and is mildly educational as well, always a plus for youth literature. The book would receive a sequel, with others in the work, too. 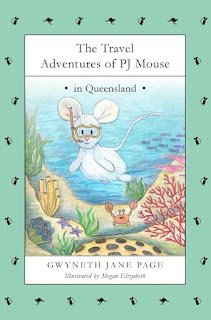 The author dedicates her first PJ Mouse sequel to her mother and family, not to mention an elementary school in her hometown of Victoria, British Columbia, which endorsed her first story. As with its predecessor, the second adventure depicts protagonist PJ’s view of the story’s setting, in this case Australia, an airplane flying to the location, specifically Queensland. The narrative opens with PJ, who has a passport of his own, and his adoptive family taking a plane to the land down under, with their excursion in the country commenced by a visit to the theme park Dreamworld on the Gold Coast, which is indeed a real place.

Illustrations show the family and their pet enduring several excursions in the park, such as a water ride, a shark encounter, and a ride known as the Tower of Terror, with no relation to the Disney Parks venues of the same identity. PJ further tries his hand at boogie boarding, and discovers the various wonders of the coral reef, meeting a friendly tortoise named Mr. Turkin who helps him back to his family when he becomes lost. The rainforest is the clan’s subsequent destination, where PJ meets another talking animal, in this case a lorikeet, who too assists him in his return back to his owners.

The travelers further explore the wonders of egg-laying by a tortoise that happens to be Mr. Turkin’s wife, with she and her fellow female turtles afterward returning to the sea before their scion ultimately are hatched. Their final excursion consists of 4 x 4’ing on Australia’s beaches, after which they return home, and PJ has a talk with the family cat about the trip, the feline having been left behind. There is the incongruity of a character called Star Bear, due to his red and yellow stars and sunglasses, being hastily introduced in the concluding chapter, but otherwise, this is an enjoyable sequel that those who liked the first book will undoubtedly enjoy. 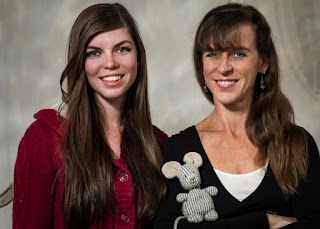 Gwyneth Jane Page (Jane), who holds an MBA from Simon Fraser University, has called many countries home. She grew up in such places as England, Peru, the USA, and the Caribbean, and has also lived in Australia and Canada. She now resides in Victoria, BC with her husband and four children. The PJ Mouse books are based on Jane's family trips with the real stuffed animal, PJ, who was found by Emily, Jane's youngest daughter.

Megan Elizabeth, Jane's second oldest daughter, has lived in Canada and Australia and travelled extensively with her family-and PJ. Having been artistic since she was a little girl, illustrating the PJ Mouse books has enabled her to combine her love of travel with her love of art. Megan completed her studies at VanArts and is now building her career as a professional photographer as well as an illustrator. She currently resides in Victoria, BC with her family.