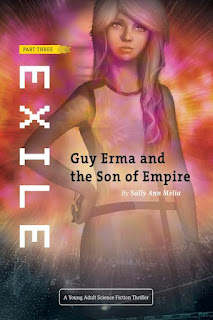 Author Sally Ann Melia dedicates the third and thus far most recent installment of her Guy Erma and the Son of Empire series, with an illustration opening the main text depicting the franchise’s titular protagonist Guy Erma, dark-haired and clothed. The story itself commences with the ironically-named Interlude (which would have been a fitting name in the longer version of the series’ combined three books) focusing on Ambassador Nikato Valvanchi II and his father, Ex-Ambassador Nikato Valvahnchi I, who discuss the recent reelection of Chart Segat as a result of the Dome Debate, and the implementation of “Phase 2,” which causes some controversy between the patriarch and scion.

Exile continues chapter numbering from its predecessor akin to how the Lord of the Rings trilogy continues with “book” numbering among its three entries, and in this case, Chapter 26 is the main opening chapter, where cyborg bodies litter the Dome, with Prince Teodor’s fate unknown, although Karl Valvanchi investigates, the Dome Elite failing to find him, as well, and Karl himself sending out a telepathic message for want of communication. The Prince and Guy Erma ultimately rendezvous, vowing to escape the dome together while evading the authorities, with the Sas Darona Liberation Army (SDLA) further stealing poison pills and threatening to use them as an act of terrorism.

Other illustrations within the text include the white-haired and eyed, dark-skinned and clothed Nikato Valvanchi, a few pictures depicting Guy Erma and Teodor, where it’s somewhat difficult to tell the two apart due to similar appearance and attired, the ironically-gray feline goran Blue Barbarina (the epilogue dedicated to her origins), the turquoise-haired Nell Valvanchi, and the Dome Medallion. The appendix at the end is helpful as well, and doesn’t require gross readjustment of the Kindle app’s text size to view properly, an issue in the third entry’s predecessor .mobi files. Ultimately, the thus far final Guy Erma and the Son of Empire novel is an enjoyable conclusion, with only a few shortcomings such as the lack of a helpful clarification in the appearances of the Prince and Guy Erma. 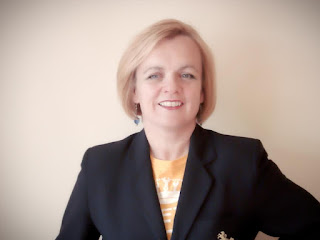 The author was born in Wallasey, England, in 1964, and moved to the South of France when she was eleven. She spent her teenage years living in the cosmopolitan city state of Monaco and became immersed in its many languages and cultures. An English girl in a French school, for three hours each week she would sit at the back of the class as her colleagues learnt English. To pass the time, she wrote stories. This led to a lifetime of writing novels, scripts, stories and articles.

In 2010, Sally joined the Hogs Back Writers, a club located on the outskirts of Guildford, and she set about turning an old manuscript into this novel: Guy Erma and the Son of Empire. Sally currently lives in Farnham, and she is married with two children.

Posted by Jeremy Gallen at 1:23 PM