Port of No Return 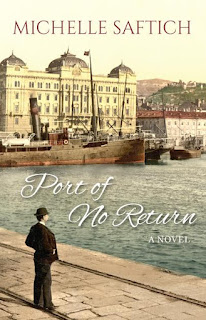 In this historical novel, which author Michelle Saftich dedicates to her father Mauro, the memory of his family, her husband Rene, and her sons Louis and Jimi, who inspire her to write about family and love, Contessa and Ettore Saforo live in Italy close to the end of the Second World War, the couple seeking protection from the bloodshed, although the fragile politics of 1944 doesn’t leave them alone. They live in the German-held and Yugoslav-threatened community of Fiume, with Ettore finding himself on the run, given the potential evil of both sides of the conflict in their town. He and his wife struggled to find one another, with their friends and family gradually recovering from the war’s aftermath.

The action begins in January 1944 in Fiume, Italy, with the town Ettore and Contessa siding with the Germans, the two having young children, and quickly finding themselves seeking sanctuary in a farmhouse on the outskirts of their village. They ultimately settle in their new environment by March the same year, with friends marrying and Contessa finding herself pregnant with her fifth child. In April, however, they decide they want to leave, although doing so would require permission from the occupying Germans, although they do eventually settle in with other relatives. Real-life events such as Mussolini’s death that month, the retreat of the Germans, and the coming of the Americans, occur, with Ettore finding himself imprisoned with friends.

Although America ultimately becomes an emigration point of interest for the Saforo family and their friends and relatives, they hold some apathy towards their supposed liberators, going to Germany, once free from the Nazis, for processing and eventual departure for Australia. Overall, this is an enjoyable historical novel that seems well-researched, the writer acknowledging an extensive interview with her father and the many displaced refugees from the Second World War alongside her editors. The story does have some occasional slow portions, although this reviewer would definitely recommend it to those who enjoy historical fiction.

Meet the author:    Michelle Saftich is a first-time author who resides in Brisbane, Australia.  She holds a Bachelor of Business/Communications Degree, majoring in journalism, from the Queensland University of Technology (QUT).
For the past 20 years, she has worked in communications, including print journalism, sub-editing, communications management and media relations. She is married with two children.Connect with the author:   Website    Facebook    Twitter