Where Christ Is Present 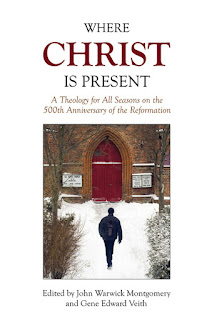 This religious book, edited by John Warwick Montgomery and Gene Edward Veith, both who contribute to it alongside other authors, commemorates the forthcoming fifth-century anniversary of the beginning of the Protestant Reformation initiated by Martin Luther. Its scripture comes from the English Standard Version of the Bible, with the publisher hoping to instigate a new Lutheran Reformation, the book dedicated to various individuals such as Dr. Howard Hoffman.

The first chapter, by John Warwick Montgomery, indicates that many don’t understand the importance of the Reformation’s anniversary, which commenced on the Eve of All Saints Day, 1517. He indicates that Jesus was a kind of “Jewish boy scout,” and analyzes the various Christian denominations, Lutheranism included, noting the problems with others while insisting that Lutherans take the scripture “exactly as it is.”

The second chapter, by Gene Edward Veith, notes the Counter-Reformation initiated by the Catholic Church in response to the Lutheran Reformation, with Luther, whom the Church excommunicated, not necessarily wishing to start his own alternate denomination, with Catholics today acknowledging that their faith was indeed in need of reform. Other denominations he analyzes, too, noting that Anglicans seek to be intermediaries between Protestantism and Catholicism, and that Wesleyans (with this reviewer being Methodist, although his beliefs lean more in favor of the Episcopal Church) believe good works play part in salvation, a perfectly reasonable belief.

The third chapter, by Cameron A. MacKenzie, tells the story of Martin Luther’s life, starting with his death as an evangelical, with some criticism of Luther brought to light such as the alleged freedom of man to commit sin, and his conflicts with fellow evangelicals. He also mentions debates about Christ’s alleged presence in communion and the nature of infant baptism.

The fourth chapter, by A. S. Francisco, notes that different denominations disagree on theology and practice, largely due to authority other than scripture, with Lutherans believing scripture is the sole source of revelation and authority, and Calvinists believing that Christ’s spirit alone exists during communion.

The fifth chapter, by Rod Rosenbladt, discusses whether salvation is earned or freely given, mentioning active and passive righteousness, the division of scripture into Laws and Promises, and bibliographies for more insight into different Christian denominations.

The sixth chapter, by Harold Senkbeil, examines the basic tenants of Lutheranism, such as Jesus being God and man, the amount of water necessary for baptism, the meaningfulness of infant baptism, the practice of confession and absolution, and so forth.

The seventh chapter, by Todd Wilken, preaches that baptism constitutes a boundary between God’s kingdom and Earth, with Satan’s realm allegedly not a true kingdom, Christians being dual citizens of Heaven and Earth, and that Christians have multiple vocations in addition to their earthly ones.

The eighth chapter, by Uwe Siemon-Netto, notes that narcissistic mindset threatens Christianity in America, with Catholics, for instance, viewing religious vocation as limited to priests and entries into monasteries, Lutherans allegedly allowing followers to delve into the realm of the secular without completely engorging themselves in its ways. The section presents various factoids such as Nazi leader Heinrich Himmler’s hatred of Christianity, most pregnancy terminations being the result of personal choice rather than things such as disability, and concludes with the statement that there is no authority except that from God.

The ninth chapter, by Craig A. Parton, focuses on Christianity and the arts, particularly with regards to composers such as Johann Sebastian Bach, with Luther, for instance, very much believing that art and music had a firm place in Christian practice, touching upon the principle of adiaphora. He notes that Christian freedom derives from freedom from sin and death, with exercise of freedom best when exercised in favor to God and neighbors. The principle of legalism adds to music with certain prohibition, institutes such as Bob Jones University, for instance, forbidding rock music in worship service, and Bach himself having secular interests and clients.

The tenth chapter, by Steven A. Hein, notes that Christians may long for more fulfilling experiences, with the Law and Gospel being parallel, and that one is not saved by the cross and can “move on” five minutes later. Faith, he indicates, is attacked by temptation, with Lutherans believing faith presents them with a life regimen.

The eleventh chapter, by Angus J. L. Menuge, analyzes the cultural and aesthetic impact of Lutheranism, noting different types of Christian response to culture and indicating that art suffers injustice when we insist it must tell the truth about God without first confessing the truth about ourselves, some samples of Christian art presented.

The final chapter, by John Warwick Montgomery, concludes the main text, indicating that at the point in the book the benefits of Lutheranism are plain, and notes the paradox that conservatives in one denomination can be liberals in another, and suggests more conservative subsectors of Lutheranism such as the Missouri Synod over the more liberal Evangelical sect, in which women and homosexuals can be ordained as clergy.

After the text are biographies of the contributors, with Francisco, for instance, being a student of Arabic and Islamic theology, MacKenzie being ordained as a Lutheran Church Missouri Synod clergyman, and Parton being a trial lawyer.

Overall, this is a fairly thought-provoking look at Lutheran faith, even if the text somewhat adopts a supremacist viewpoint in that regard, with this reviewer still true to his Episcopalian and Methodist leanings, given his view that salvation is something one must actively work for instead of being received freely simply by faith.
Authors’ Bio: 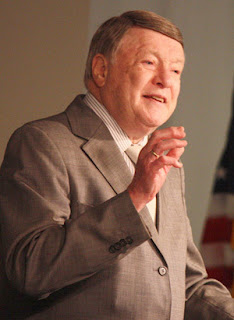 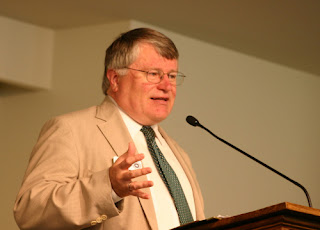 Gene Edward Veith is the Provost and Professor of Literature at Patrick Henry College, the Director of the Cranach Institute at Concordia Theological Seminary, a columnist for World Magazine and TableTalk, and the author of 18 books on different facets of Christianity & Culture.